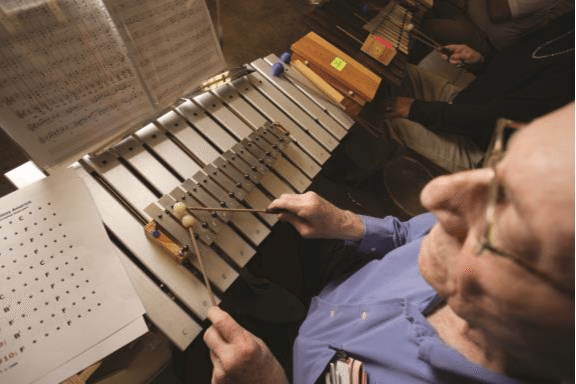 *(The official title of our class, as listed in the OASIS catalog, is “Swing Ensemble for Pitched Percussion.”  My abbreviation for us is Swing-En – a good name for these episodes.)

September, 1999 . . . the very first Orff class with senior adults.  Armed with a terrific set of goals and objectives (see last posting), I had planned a surefire lesson.

We, my seven students and I, sang a pentatonic song about mallet technique.  We learned the names of the Orff instruments in our ensemble and how to hold the mallets.  We went on to play a bordun and quickly advanced to playing the bordun in all of its forms.  Next, after singing the song again, we learned to play the melody – though not alternating mallets, as I had hoped.  But, we did accompany the melody with two forms of the bordun.  I was ecstatic and told the class how much they had accomplished!  I may not have known how to teach senior adults, but even I could read the expression on their faces, “What in the world have we gotten ourselves into?”  Next was the social component of class – conversation, coffee and calories.  I started the conversation with a question about musical backgrounds.  Did anyone take piano lessons, sing in a choir or play in a band?  The “socializing” became musical resumes.  Obviously, I did not know how to engage my new students.

The drive home was a sober one.  Never had I felt like such a failure.  How could I possibly conduct nine more sessions?  Should I quit?  Could I quit?  No – I would try to improve.

First, forget about the goals and objectives.  The next class would concentrate on making music and having fun.  At one of the Orff conferences a presenter (thank you, whoever you are) had arranged the “54th Street Bridge Song” more commonly known as “Feelin’ Groovy.”  The accompaniment was a repeated chordal pattern that we could manage.  The senior adults appreciated the change from the previous week.  Unfortunately, three of the seven class members had quit.  This was a new kind of teaching where the students voted with their feet and did not return if their expectations were not met.

The following eight weeks were a hodgepodge.  I tried materials that I had used with fifth or sixth graders.  But those selections were often inappropriate for the seniors and sometimes were too difficult.  When the spring session began, the four original members re-upped and were joined by three newbies.  I still wasn’t sure about content, but felt better about relating to senior adults.  There were no classes during the summer.

In the fall of 2000 there were only three enrollees.  Orff for Adults was cancelled.  Financially, OASIS could not offer a class without at least seven members.  Now what?

Mary Lou Richardson taught elemental music and movement, K-6, for thirty-three years. She served as president of St. Louis AOSA, completed level and master Orff classes and presented at both the 1978 and 2012 St. Louis AOSA conferences, as well as in Cincinnati in 2001. In the fall of 1999 she became teacher/facilitator of an Orff class for senior adults, which she continues to this day. The past years have been filled with pits and pratfalls as well as laughter and joyous music-making.