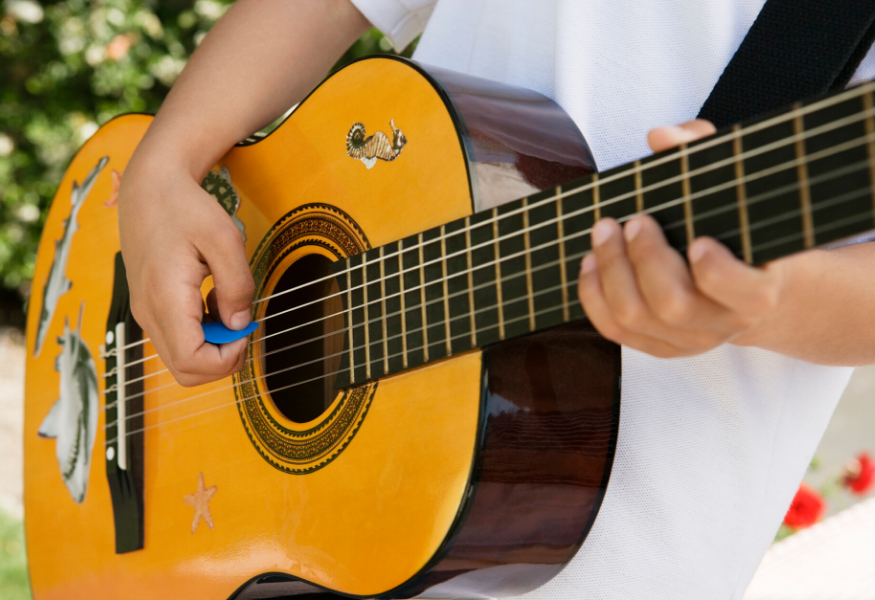 There have been rumblings lately of this new approach to teaching music called “modern band”. While many may just write it off as another passing fad, there is merit to further investigation; teaching and learning processes found in modern band classrooms parallel many aspects of the Orff-Schulwerk approach. Modern band also offers a way to connect to children’s lives through popular music.

First, it must be clarified that modern band is not the name of the approach; it is the name of the class. With input from K–12 music teachers, the term “modern band” was coined by Little Kids Rock founder and CEO David Wish to encompass a kind of music education programming that places popular music at the center of its canon. Just like choir, band, and orchestra have a typical set of instruments that are a part of the ensemble, modern band include drum set, bass guitar, electric/acoustic guitar, vocals, and computer music software.  It is worth mentioning that the “band” term in modern band does not mean that there has to be band instruments or even group performance. Some modern band teachers are doing beat making and audio production, neither of which are a “band”. Styles of music that are commonly taught in modern band include rock, pop, reggae, hip-hop, rhythm & blues, electronic dance music, and other contemporary styles that students prefer (Little Kids Rock, 2019).

The approach used in modern band is called Music as a Second Language (MSL). MSL is an approach to music education that was adapted from Krashen’s Five Hypotheses of Second Language Acquisition. As a learner-centered approach, MSL shares many characteristics with the Schulwerk. What follows is a compare/contrast of Orff Schulwerk with the five hypotheses of MSL: acquisition/learning, monitor, natural order, input, and affective filter. This comparison brings to light the many strengths of the Schulwerk, but also prompts reflection on some aspects of the Schulwerk that teachers forget or misunderstand.

The acquisition/learning hypothesis of MSL states that children acquire a considerable amount of music informally prior to starting school music; therefore, music teachers should “speak” the type of music with children who are already in the process of acquiring it. What did Orff say about how children learn music? “I was fascinated by the idea of a musical education completely geared to the child” (Orff, 1963, p. 142). Orff wrote about a rhythmic education that should begin when a child starts school, or pre-school. The unity of music and movement is natural to children and is a cornerstone of the Schulwerk. The use of the voice is natural—the call, the rhyme. All together speech, movement, and play are the Schulwerk. Children bring this culture with them and it is up to the Orff teacher to tap into it. Both MSL and Orff use children’s prior knowledge and honor the considerable amount of musical knowledge they bring to the classroom. Modern band does this through popular music and Orff largely does this through playground games and nursery rhymes and chants. To fully tap into students’ knowledge, Orff teachers may want to consider using more songs that children already know (i.e., popular music).

The monitor hypothesis of MSL means that children scan for errors and use learned systems to make corrections. The monitor is effectively used when the child has a knowledge of the rules and there is time to think and use rules efficiently. Orff agreed with this principle. “I try to bring the students to the point where they could invent music of their own to accompany movement, however modest such inventions might be at first” (Orff, 1963, p. 70). The Schulwerk’s process of imitate, explore, create builds a foundation for knowing “the rules”, then prompts students to go further. While students in Orff classrooms engage in activities that help them listen and make musical decisions based on rules they have learned, sometimes teachers do all the monitoring for the children or do not allow the time (or have the time!) needed for this reflective process.

This hypothesis claims that acquiring grammar has a natural order and should not be rigidly structured. Grammar-first instruction makes it difficult to discuss or read anything of true interest or authenticity. For example, teaching a lesson about how folks songs typically have a four-phrase structure, end on “do” and have a phrase that repeats is not as effective as teaching a play party game and breaking down concepts that “live” within the music afterwards. The Schulwerk is an approach that many have called holistic or “organic”; children’s musical decision-making and interests direct the flow of a lesson and so it is not rigidly structured or predictable. This was Orff’s intent:

The Schulwerk grew and developed…it was not the result of a preconceived plan–I never would have been able to plan so far ahead–it simply arose from a need which I recognized. Those who look for a method or a ready-made system are rather uncomfortable with the Schulwerk; people with artistic temperament and a flair for improvisation are fascinated by it. (Orff, 1963, p. 69)

However, situations often force teachers to canonize the Orff approach to meet standards and administrative expectations. Choosing repertoire purely based on the concept it teaches rather than its unique form or beauty is a problem and makes the musical experience less satisfactory and authentic. These are things to continue to be mindful of as an Orff teacher.

Input means, “is it understandable?” Children need to have vocabulary they understand in order to learn; they need an immersive environment with fluent speakers and exposure to higher levels of linguistic competencies. In music, this means having a music vocabulary (this includes aural skills such as knowing melodic and rhythmic patterns by ear) and a “fluent speaker” in the room (i.e., the teacher). Music teachers model this fluency every day, particularly when guiding composition. Teachers help children build the vocabulary they need in order to be able to construct a composition successfully. However, something that Orff teachers should consider is that students may also be fluent speakers. Often, teachers see themselves as the only fluent speakers in the room and they do not take the time to see or hear if students are fluent speakers in some capacity. For example, I learned that one of my 4-year-old students plays a tubano fluently in his home. I had not realized this at first and was feeling a little frustrated when he was not following my modeling on the hand drums. When I discovered this, I altered my lesson plan to allow “free play” time on the hand drum as we passed it around the circle. This allowed the child to demonstrate the rhythms and styles of hitting the drum he know—all the children in the class benefited from watching their classmate. Teachers can limit student success rather than support it if they stifle student fluency.

This is basically how much anxiety students feel in the classroom. A high affective filter means that a student is feeling very stressed and anxious and has low self-confidence. A low affective filter mans that the student feels very little stress or anxiety and has motivation and self-esteem. Low affective filters are promoted through: (1) group experiences prior to solos; (2) class compositions prior to partner or solo compositions, (3) mindful teacher planning of lessons (knowing what students are comfortable with), (4) options for students to “pass” on turns; (and (5) teacher affirmation of student responses when they speak up or solo musically. These characteristics are very common in Orff classrooms; it is clear from the creativity that flourishes from children that Orff teachers excel at keeping students’ affective filters low.

Both Modern Band and Orff include the belief that children arrive in the classroom with many assets. Modern Band and Orff classrooms are low-anxiety environments that are conducive to learning and taking risks. Flexibility and authenticity are valued ideas in both settings as is helping set a foundation for successful music learning and expression.

Some differences between Orff and Modern Band are in the repertoire used and the emphasis on musical skills. Orff teachers “speak” music with children who are already in the process of acquiring it in terms of playground play, rhymes, and calls. They may use songs that parents sing to them (I see some Orff teachers using parents as culture bearers) and folk songs that children actually know. MSL is much more focused on teaching children the music they know—largely popular music. Modern Band is more focused on the aural assets of children, while Orff saw aural/kinesthetic assets as one and the same. It seems that the Schulwerk taps into what children naturally do across cultures (e.g., playground musical culture), while MSL is more tied into the sonic landscape that children live in (through adults, media, context). Either way, understanding Modern Band and the MSL approach can help Orff teachers think reflectively about their practice. Opening up the curriculum to include more popular music, aural skill development, and time for reflecting on musical decisions could be beneficial for the children in your classroom.

Martina Vasil, PhD, is assistant professor of music education and director of the Modern Band, Orff Schulwerk, and Dalcroze Summer Institute at the University of Kentucky. She also teaches PreK–6 music at Lexington Montessori School once a week and is Orff Level III and Dalcroze II certified. Martina is president of the Kentucky Orff-Schulwerk Association and is on the The Orff Echo editorial board.

See all posts by Martina Vasil