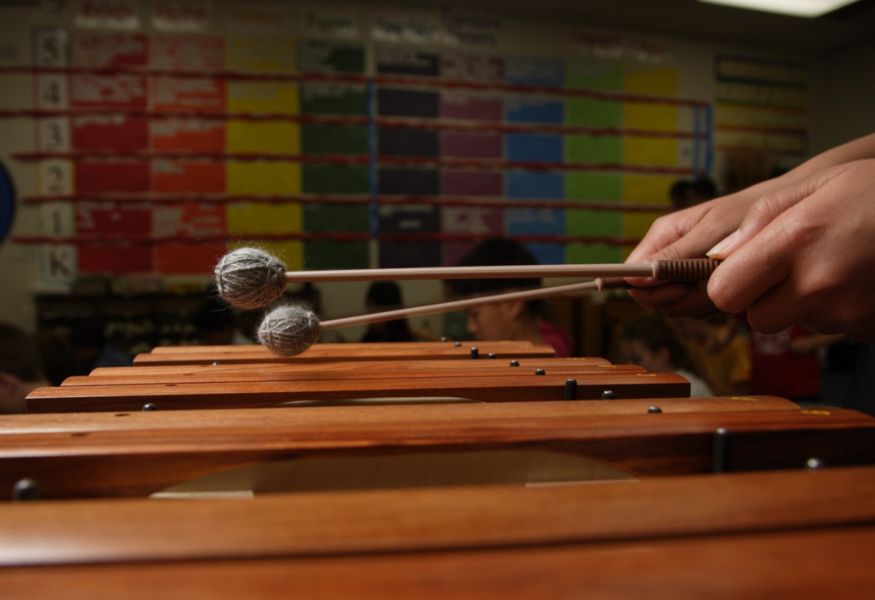 One way to instantly bring more musical interest and musical independence to the elementary general music classroom is by adding a bordun.

If you’re like many teachers, this is a word you might have heard before or read about without a clear understanding of what it is. Today we’ll define what borduns are, look at four different types you can try out, and think through as some guidelines for making your own musical decisions.

A bordun is normally an open fifth (normally scale degrees 1 and 5) that is played continuously throughout a piece, like an ostinato drone.

Borduns are a beautiful way for students to begin adding more texture to pieces from a young age! They really fill out an arrangement and can make a musical product sound much more solid.

There are several different types of borduns students can interact with depending on our goals and students’ musical development.

The most commonly used category is simple, so that’s what we’ll focus on today.

The two pitches (scale degrees 1 and 5) are played together at the same time.

This is the lowest barrier to entry for students beginning harmonic work, so this is often the first drone we use.

I normally ask students to play a steady beat on do and sol without introducing the word bordun. If we’re doing partwork before students have conscious knowledge of do and sol, I’ll ask them to keep a steady beat on the “big C and big G,” or whatever tonic and dominant are in that particular song.

The two pitches are played one at a time with alternating hands.

This is another option that works well for students just beginning harmonic work.

I ask students to play a steady beat on do and sol, and to have their hands take turns playing. The important thing here is that they start with the left hand, or, on the biggest bar.

In a Level Bordun, the two pitches are played together, but they alternate between different registers. Those registers might be octaves on the same instrument or on different instruments.

As students gain more motor skills and are ready for more of a challenge, a level bordun can be a great option.

I ask students to start on the low pair of do and sol, then float their mallets to the top pair.

The arpeggiated bordun is also called a crossover bordun because The left hand crosses over the right to play the higher tonic pitch.

This is the most involved in terms of physical coordination, but a fun challenge for older students!

USING A BORDUN: WHAT TO CONSIDER

Since borduns make such a big impact musically, we use them a lot! Here are some things to keep in mind when you’re deciding when and how to use a bordun.

Harmonically, It’s convenient to use a bordun with pentatonic melodies or melodies that are modal.

The bordun doesn’t change with the harmonic outline of a piece like it would if we were using chords in functional harmony. You’ll recall that these bordun patterns stay on scale degrees 1 and 5, so the melody needs to be something that can rest on that tonic pitch without wanting to be pulled in different harmonic directions.

Not every song is a candidate for a bordun. Here’s an example with the song, One, Two, Three, Four, Five, Once I Caught a Fish Alive.

Because of the melody of the song, we naturally want to pull to the dominant chord.

One, Two, Three, Four, Five with a Bordun

We can hear that this song isn’t a great candidate for a bordun. We’d be better off using chords and chord changes so we can show that functional harmony.

As with all musical rules, the real rule is that you make creative decisions for your classroom based on your informed musical opinion. There are times you may choose to use dissonance intentionally based on your creative musical goals.

While they certainly can utilize combinations of long and short sounds, the purpose of the bordun is to make the piece feel solid and grounded. This particular part in the ensemble is unlikely to have interesting combinations of long and short sounds. The simpler the better, and most of the time, keeping a steady beat on instruments is the right way to go if you’re not sure what to do.

Along those same lines, we want the bordun to fall on the strong beats of the meter. This means the downbeat, and then perhaps a secondary strong beat depending on the meter.

When to Introduce a Bordun

When are students ready to work with a bordun?

It’s likely that students are ready to use a bordun early in their musical development, around 1st grade, especially if we start with something like a chord bordun. However, there are some things we can do before moving to instruments to help students be successful when they try this out.

We’ll look in to that more in the next post.

As we add new textures and harmonic possibilities for students in elementary general music, we provide opportunities to strengthen musical independence. We also open students’ ears to new options when its time for them to make their own informed, creative decisions.

Victoria Boler is a leading elementary general music educator and curriculum designer. In addition to general music, Victoria has taught orchestra, choir, and percussion ensembles. In an administrative role, Victoria has served as Fine Arts Coordinator, leading band, orchestra, choir, general music, and musical theater at the programmatic level. With Orff certification in all three levels and a Master of Music in Music Education, Victoria is also in the process of completing her Kodaly training. She publishes general music curriculum and instructional materials at victoriaboler.com, where she serves and collaborates with educators in their journeys to create grounded and artistic music curriculum for their unique teaching scenarios. Victoria is also a lesson author for Hal Leonard's Essential Elements Music Class.

See all posts by Victoria Boler